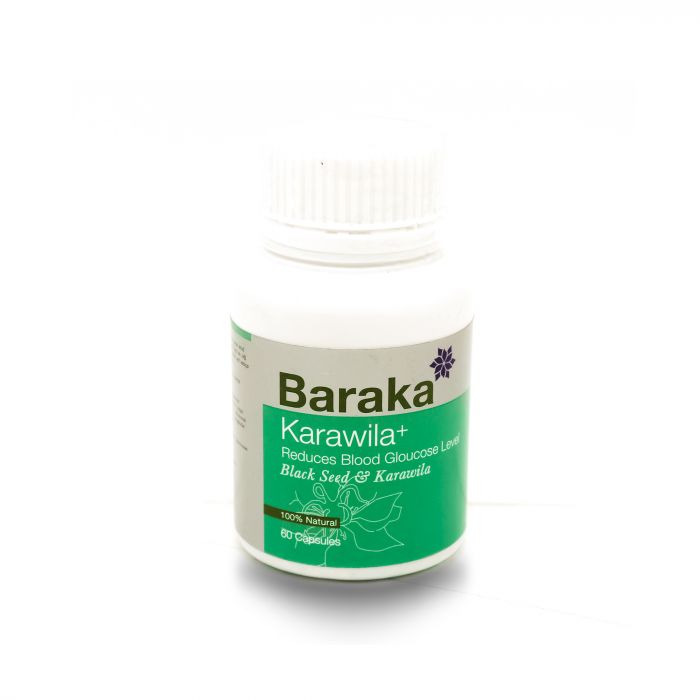 (100)
Availability : In stock
Karawila, better known as Bitter Gourd or Bitter Melon is widely used as an insulin replacement due to its natural ability of insulin production. Karawila is valued for its various medicinal values in Ayurveda. Karawila + Plus is a combination of karawila and black seed oil, the herb well known for its miraculous healing abilities and for enhancing the immune system. The two combined herbs will not only control your blood sugar levels but also act as a daily natural nutrient supplement of the body.
SKU
008197
Special Price LKR272.00 Regular Price LKR320.00
Add to Wish List
Details
"Baraka Karawila plus is a combination of Karawila powder (Bitter melon) and Black seed powder which is formulated to control the blood sugar level in the body. Karawila (Memordica charantia) is a proven herb to address both insulin dependent diabetes and non-insulin dependent diabetes. Memordica charantia contains compounds known as momocharin and momordicin which believed possess insulin like chemical structure and properties. Along with those compounds Karawila possess different mode of actions for hyperglycemic conditions such as inhibition of intestinal glucose uptake, insulin segregation effect, preservation of islet beta cells and their function and stimulation of peripheral and skeletal muscle utilization. Other than that, Karawila is used for diabetic complications such as diabetic enteropathy and diabetic neuropathy. Black seed powder (Nigella sativa) is the next major ingredient in the Karawila plus and it contains Thymoquione as its active ingredient. Thymoquione helps to prevent the development of pre-diabetes in the body and support to increase the insulin sensitivity of liver cells. Baraka Karawila plus is recommended to consume at diabetic or pre-diabetic stages or for individuals who has concern of controlling the blood sugar level in the body. Recommended intake is two capsules after breakfast and two capsules after dinner. Presentations: 60 capsules bottle"
Delivery and Returns